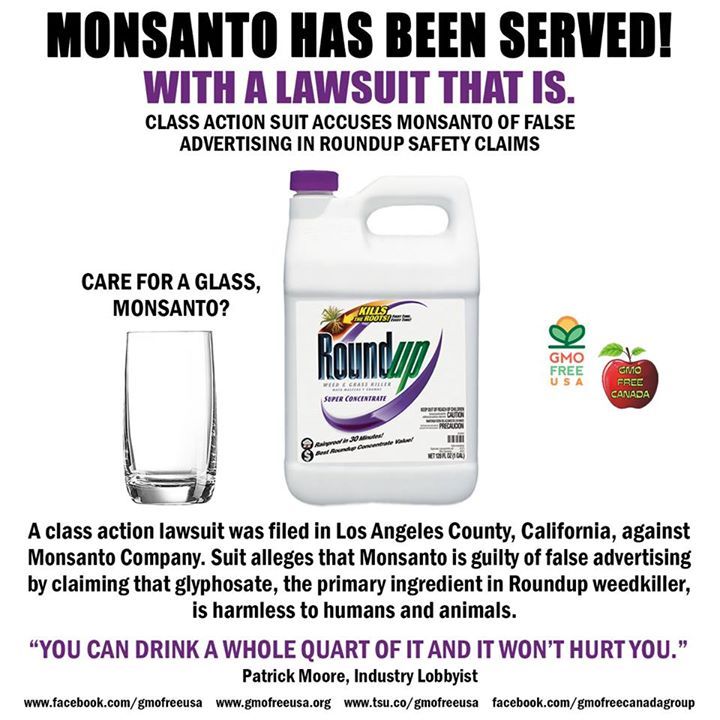 Congresswoman and Presidential candidate Tulsi Gabbard (D-Hawaii) last week called for a ban.“We need to ban all products containing glyphosate, including Roundup,” Gabbard tweeted on February 16. “It’s poisoning our people, butterflies and other insects, the land and the water.” (Feb 2019, corporatrecrimereporter.com)

While anybody in the know would praise such a regulation, there still remains a couple of lingering questions: 1st, what are we going to do with the lawmakers that got paid to ignore the issue, despite all the studies proving that Monsanto practices amount to a crime against humanity?  And 2nd, why isn’t Gabbard intiating a class action to send the Monsanto CEOs and scientists, who stayed silent over the two last decades, behind bars?

Well, the answer sounds pretty straight forward though: the “chemical lobby” is still all too powerful to allow such an action to happen as rapidly as many would want, but things have definitely changed for Monsanto.

Monsanto will eventually collapse — and in its wake more fraudulent science will unravel — the evidence is now way too staggering, but there are so many other deeply unethical corporations out there that should be shut down. Corporate lobbies dictate all the regulations to get their needs satisfied. The saying “power corrupts and absolute power corrupts absolutely” will forever stand as an absolute truth.

Monsanto bought a leading bee research firm after being implicated in bee colony collapse, in 2012. Monsanto scooped up the Beeologics

If this is not a highly suspicious behavior, what is it?

Monetarism is the tool for power. The underlying question here is the following: can money ever be used to serve freedom?  Or let’s rephrase this differently: has the world really become freer over  the centuries?

That’s where reality shows its true colors: we live in a society where freedom can be sold to the highest bidder but rarely experienced genuinely by the crowds. Living “free range” has nothing to do with freedom. It is like comparing apples and oranges.

Talking of the research firm bought by Monsanto,  the American Soybean Association CEO, states it quite plainly. It was a move to help Monsanto and other biotechnology giants squash competition and make profits. After all, who cares about public health? “It is a concern from a competition standpoint,” Censky said in a telephone interview. (globalresearch.ca)

This quote above is quite troubling because it rather highlights that there is something definitely wrong with the “competition premise“. The goal of competition is to eliminate all competition, how obvious!  Competition for the top really means collusion, and more collusion from the top, the more people suffer. It should be clear by now that competition is inimical to the destiny Humanity.

So maybe, it is about time to abandon a concept that has brought nothing but despair and environmental destruction. That really would be the only rational stance to embrace at this stage. Throwing in the towel. Monsanto has done enough damages to the planet and her inhabitants. Hasn’t it?

From there and for more input, one also might need to look beyond the ecocide by chemicals and deeply wonder: why do populations tolerate “power” in first place? This isn’t nothing new and extremelly well documented. Many apologists will scream that we need this “power” to avoid lawlessness. What is absolutely nonsensical because political and industrial corruption is today threatening the fabric of society itself.

The case of Monsanto is a irefutable evidence among many. Our laws have become utterly irrelevant. Actually they have always been. Bad people will always circumvent any laws as they see fit. Obviously we have too many laws, haven’t we?

Even if Monsanto is forced into bankruptcy, glyphosate is everywhere now, even deeper underground in our aquifers and it is unlikely that we have the technology to remove it from the environment. The Pandora Box is wide open.

So the question: do we really need “power” that bad to tell us as how to behave?

Since harmful regulations can be imposed upon the masses for so long and globally, one has to ask onself: what is the real deal between the Right vs Left as both have been unable to protect the people and the ecosystem?

Anybody who really grasps the paradoxical aspect of power, will just quit supporting any side — for good. World peace and abundance depend on a critical mass doing just that!